ICE District, is a 25-acre mixed-use development project located in the heart of downtown Edmonton. ICE District is a transcendent, modern, urban destination and gathering space and ranks as the largest mixed-use sports and entertainment district in Canada and the 2nd largest in North America after Hudson Yards in New York. The project was awarded Engineering News-Record’s 2020 Global Best Project Award in the Retail/Mixed-Use Development category. ICE District is home to a mix of premium office space, high-end residences, a luxury hotel, boutique shops and restaurants, all anchored by Rogers Place, a state-of-the-art sports and entertainment facility that is home to the NHL’s Edmonton Oilers. ICE District is a place to gather where people live, work, stay and play.

HEART OF THE CITY

ICE District has transformed downtown Edmonton and created a new “heart of the city” adjacent to the downtown Financial District and immediately north of the downtown Government District. Upon completion of the first phase, ICE District will consist of 230,000 square feet of multi-level retail space, including several shopping and first-class dining options, 1.3 million square feet of LEED gold office space, over 740 luxury residential condominiums and rental units, a JW Marriott Hotel that includes 346 hotel rooms and over 16,000 square feet of meeting facilities space, a 47,000 square foot world class Grand Villa Casino, over 28,000 square feet of mixed-use public event space in Ford Hall, underground parking facilities with over 2,700 stalls, and Rogers Place, a world-class premiere sports and entertainment venue, with capacity for up to 20,000 fans.

ICE District is Edmonton’s potential brought to life. Our vision for ICE District started with Daryl Katz, who saw the need and opportunity to build a fully integrated mixed-use sports and entertainment district with the primary objective of creating a new ‘heart of the city’ for downtown Edmonton. Katz Group saw an opportunity to transform the landscape of the downtown core, which is why they partnered with the City of Edmonton to build Rogers Place, the central foundation and catalyst for ICE District.

Daryl Katz purchased the Edmonton Oilers in 2008, and brought with him the vision of what a downtown arena district could do to revitalize his hometown. With the arena deal in place between the Katz Group and City of Edmonton, the then-called Edmonton Arena District (EAD) began to take shape as office towers, condos, a public plaza, and hotel. Rogers Place opened in 2016, heralding a new era of activity and excitement in Edmonton’s downtown. In 2017 Edmonton Tower opened its doors. In 2019 Stantec Tower and the JW Marriott Hotel opened, connecting ICE District to the rest of downtown via Edmonton’s expansive indoor pedway system, and later that year the concrete was poured to develop the ICE Plaza skating rink. In 2019, ICE District’s SKY Residents and Signature Suites opened to residents.

Envisioned over a decade ago, ICE District is a beacon for residents, capital investment, business and tourists by offering a place where people can live, work, stay and play all in the heart of Edmonton. 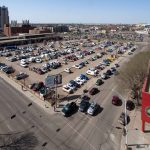 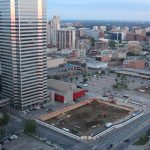 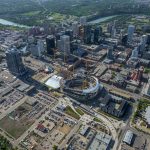 2015:  Looking Southeast.  Steel trusses on Rogers Place about to be attached.  Edmonton Tower just rising above grade.  Parkade excavation under the JW Marriot Hotel, Stantec Tower and ICE Plaza not yet complete. 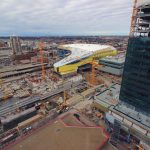 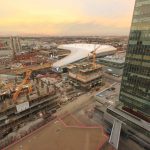 Late 2016:  Looking Northeast. Rogers Place now open.  Edmonton Tower a month away from opening. JW Marriott Hotel and Stantec Tower begin to rise.  Excavation of the West side of the plaza/Block B-G has commenced.