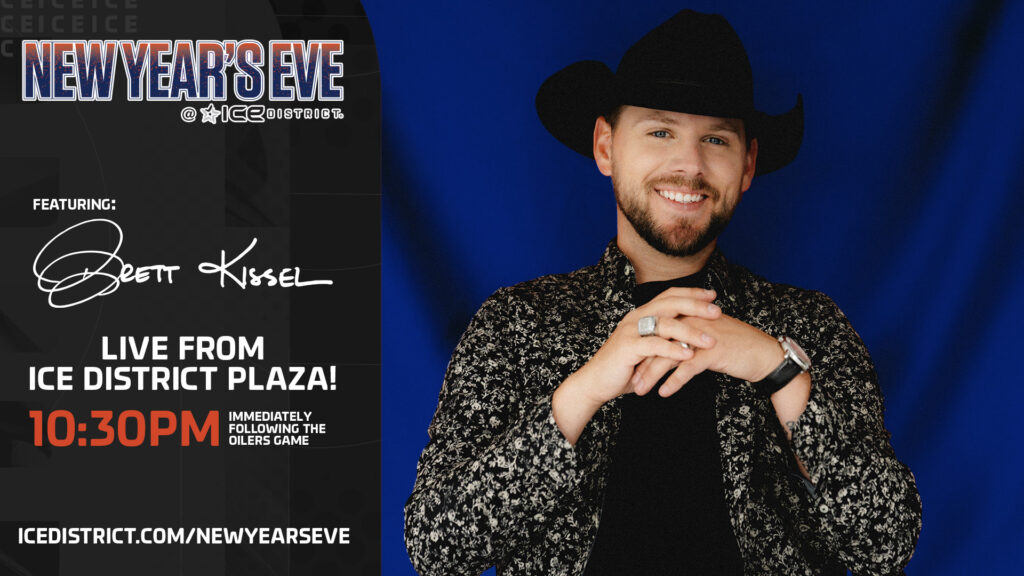 With the Edmonton Oilers facing off against the Winnipeg Jets for a New Year’s Eve matchup on December 31 at 8:00 PM, fans are invited down to ICE District Plaza starting at 6:00 PM for a tailgate party and watch party with DJs, food, alcoholic and non-alcoholic beverages, outdoor heaters and the game on the big screen. Following the game, ICE District Plaza will be transformed into an epic New Year’s Eve party headlined by country music legend and proud Albertan, Brett Kissel—including giant countdown screens and a pyrotechnic display at the stroke of midnight—followed by even more live entertainment.

With 3x Platinum-certified albums, 2x Gold-certified albums, 10x Gold singles and 16x top-10 radio his to his credit, Brett Kissel has had and extraordinary rise to superstardom in the Canadian country music scene since his first single release a decade ago in 2012. When the world pressed pause in 2020, Kissel put his foot on the gas pedal, with a steady stream of hit songs, hit records and some impressive award show victories—including winning his 22nd CCMA Award last year in London and his third JUNO Award this past May in Toronto for his critically acclaimed album ’What is Life?.’

Having toured with icons Garth Brooks and Brad Paisley, Kissel has learned the tricks of the trade from the best in the business and has established himself as one of Canada’s most beloved entertainers. Kissel is also well known for his outside-the-box collaborations, which have led to some extremely unique duets featuring Grammy winners: Charley Pride, Dave Mustaine, Nelly and recently legendary R&B group—98 Degrees.

Kissel is currently working on what he explains is the most extravagant recording project of his life – a new multi-album package releasing in 2023. His latest single ‘Watch It’ is out now on Canadian Country Radio, and all streaming services.

This New Year’s Eve celebration is part of the Winner SolstICE event series in ICE District running from December 23 to January 1. With 10 days of holiday season adventure and entertainment for the entire family, the Winter SolstICE event series features a variety of special events in ICE District including a snow maze in the Fan Park, skating with Santa in the Plaza, the Oilers Skills Competition at Rogers Place, Oilers and Oil Kings hockey, an epic New Year’s Eve celebration and more.

Go to icedistrict.com to learn more about the Winter SolstICE event series.