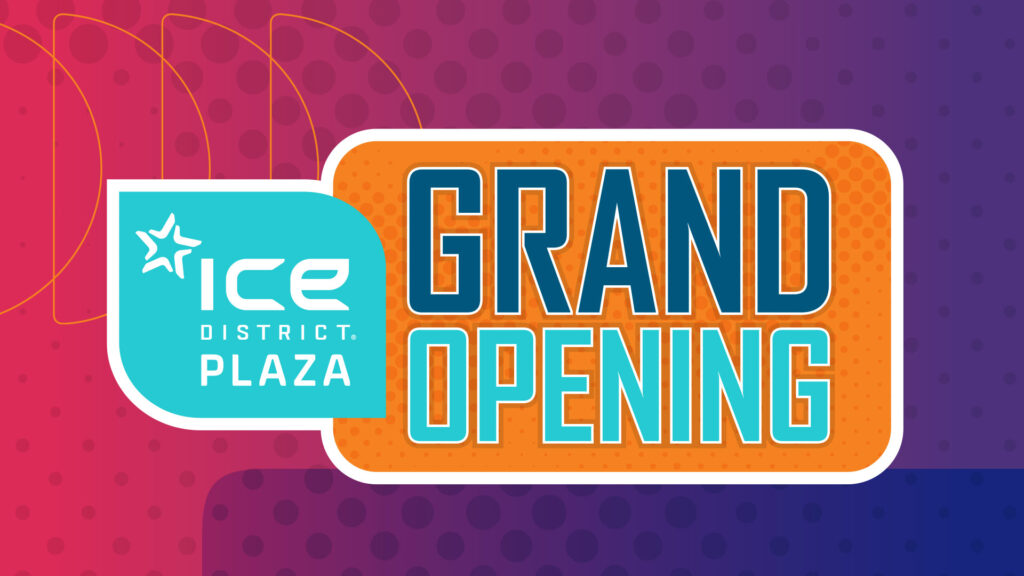 A day of celebration planned in the Plaza, culminating with a Battle of Alberta watch party at 8:00 PM MT

The ICE District development is the vision of born-and-raised Edmontonian Daryl Katz, owner of the Edmonton Oilers Hockey Club and founder and Chairman of Katz Group, one of Canada’s largest privately-owned companies. With the pandemic pause behind us, ICE District businesses welcoming their employees back to the workplace, and ICE District Plaza officially open to the public—Daryl’s vision of creating a social and cultural epicenter for all Edmontonians has been realized.

“It is thrilling to see this vision come to life,” said Stu Ballantyne, President and Chief Operating Officer, Rogers Place and ICE District. “We set out to create a place for visitors to the city and Edmontonians alike to gather and experience the very best the city has to offer, and we could not be happier with the product. I speak for our entire team at ICE District when I say that we can’t wait to continue to create memorable moments and once-in-a-lifetime experiences for anyone who visits ICE District in Downtown Edmonton. As the Edmonton Oilers playoff run showed us, ICE District Plaza is a destination for people of all ages and backgrounds, and has truly become a postcard image of Edmonton’s downtown that has been broadcast around the world.”

To celebrate the opening of ICE District Plaza, the team at ICE District has planned an afternoon of programming and activities for October 15 culminating in the much-anticipated return of the Battle of Alberta—with the Edmonton Oilers hosting the Calgary Flames at Rogers Place at 8:00 PM MT.

The grand opening celebrations will begin at 4:00 PM MT with ticket giveaways and activities, and run until the Oilers-Flames game starts, with ICE District Plaza hosting the official watch party for the game. The festivities in the Plaza will include remarks from Chief Wilton Littlechild, Federal Minister of Tourism, the Hon. Randy Boissonnault, Mayor of Edmonton, Amarjeet Sohi and other business and community leaders—followed by exciting live entertainment and appearances from Edmonton Oilers alumnus Georges Laraque, mascot Hunter the Lynx, the Orange and Blue ICE Crew and many more.

Saturday is also the last day of the Edmonton Oilers Community Foundation Battle of Alberta 50/50 raffle with net proceeds in support of STARS Air Ambulance. Tickets are available to anyone in Alberta at EdmontonOilers.com/5050.

The opening of ICE District Plaza, and ICE District as a whole, is a milestone for the city of Edmonton and its downtown core. The excitement around ICE District has only picked up momentum this fall with additional business tenants opening their doors, and more exciting grand opening announcements expected in the coming weeks—and the coming years as development continues.

“It is an extremely exciting time for downtown Edmonton and the official opening of ICE District Plaza is only the beginning,” added Mr. Ballantyne. “We look forward to welcoming new tenants, residents, fans, guests, visitors, and all Edmontonians to the Plaza in the days, months, and years ahead.”